On opening a bookshop 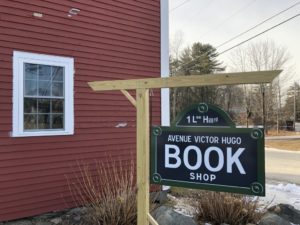 Opening a bookshop is akin, in some minds (my own, for instance), to opening a show—a sheerly theatrical event. There is no chance in hell that you will make much in the way of profit. There is a very slim chance of it succeeding longer than the requisite three year term limit for most new businesses. It is done out of hubris. Because you can. And you must.

I have just done this again for the fourth time and can’t help recalling the first attempt in 1975. That one took twenty-eight years to fail, but not for lack of trying. (We did almost everything the wrong way and to a fault.) The second, opened while the first was still wrangling with reality, lasted ten years but only five of those under my own tutelage. The third opened shortly after the first was forced to close and lasted less than a year before we were burned out by the angry gods who had thought, I suppose, that they were rid of us. Now the fourth. . . . Perhaps that should be four and a half. I am still proud enough of my pushcart bookshop—an open air proto-bookshop—and the roughly three years spent on the streets of Boston selling odd books and magazines. That was truly fine. But I certainly don’t count the on-line thing that I still pursue to this day—a sort of robot bookshop—a pretend bookshop—a pretense of a bookshop—a mere pretext for making a little needed income out of our time and sweat and the books we have, that is like a plane with one wing and only capable of flight in the unreal ether of the internet. We do sell books there but no one actually browses. That place is found by a sorting and accumulation of zeros and ones in an instant gratification of desire. Hardly a browse. With the rise of the robot sex partner I feel a bit queasy with the sense that I am in a related business.

I think it was this last thought that spurred me on to opening our barn to browsers. No matter how few customers might come in, the human contact makes the entire enterprise real. I?m a bookseller again! There is some dignity in that. Some self-respect can be had in the face of others with a similar love of books.

In only 21 Saturdays, that is an equivalent of a mere three weeks of opening our doors, I have accumulated a list of several dozen book recommendations while engaged in conversations. I ordered a copy of Howard Mansfield’s The Same Ax Twice (from another robot bookseller) and have spent wonderful hours in the evening reading this fine writer and conservationist who was previously unknown to me. I traded credit to another customer for a copy of Gertrude Himmelfarb’s On Looking into the Abyss and found confirmation there for my own worries concerning the war for Western Civilization and some enlightenment about what I might do to staunch the wounds. I received a copy of M. E. Bradford’s A Better Guide than Reason and reacquainted myself with why I am not an anti-Federalist nor a Whig. I discovered Russell Kirk’s Enemies of Permanent Things and found a new understanding of what motivates modernist thought along with a different perspective on Thomas Stearns Eliot (who it turns out is not a modernist at all!). To my delight, I have been motivated to re-read The Screwtape Letters by C. S. Lewis and a deal of Jacques Barzun’s The House of Intellect. And very happily, I have started re-reading Richard Mitchell, ‘The Underground Grammarian,’ and his enlightening Less than Words Can Say. Admittedly I have avoided reading much of the fine fiction that has come through those open doors because I am in the midst of writing something myself and I am too impressionable to withstand the magic of other authors. Still, the results from those Saturdays has been fantastic!

And now the show must go on.