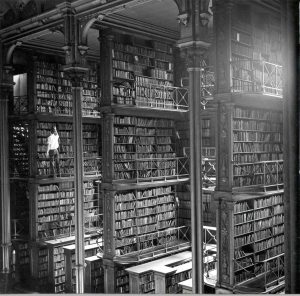 This is the first draft of a declaration of independence—of a sort. Much like the novel that spawned it, an odd sort of novel, this declaration is not of the usual kind. It is intended to be made not to a public, but to yourself. How well you keep to its aims is your own concern. No one else need know how you failed or succeeded. But if you are sympathetic to the cause, please make suggestions for improvements to help make such a project work. And don’t hesitate to spread the word.

It’s up to you, as it always is and was. This is not to say that you have no alternative. I know many book lovers who would not be interested in anything of the sort. They are fine with the fungible texts of tablets, and cheap paperbacks, and don’t think there is any worry over being told not to read one thing or another, or, worse, they believe they actually need such guidance. If the library no longer stocks To Kill a Mockingbird, it’s for the best. They’ve heard it was a problematic story and might not have even been written by the supposed author. There’s plenty left to read without getting all hot and bothered over Henry Miller or even Mark Twain. Mark Twain had his flaws too. And Margaret Mitchell—bah! I have seen many a used copy of Gone with the Wind come in the shop that was only read part way. It’s only right that the literature changes with the times, is it not? Beowulf and Chaucer and Shakespeare are artifacts. What do they know about our modern world? What do they know about a digital universe? And besides, maybe we can correct those texts now and rid them of their bigotry, sexism and prejudice. They are not perfect either, you know? Too many words.

But for those happy few willing to give it a go, I hereby propose a new resolution. Resolution 451.

No virtue signaling, please! This is not an addiction recovery program where your lapses and failures must be proclaimed. It’s the opposite! Be it hereby resolved that you will live with your books, from this day forward, through sickness and health. These 451 works will be your choices and you can keep all your excuses to yourself, just like the books. Just be sure to take care that they do survive your own inevitable demise.

Given the wholesale failure of our public libraries to preserve either the literature of the present or the past, thus leaving the future of our culture at the mercy of whatever momentary infatuations, popular delusions, or righteous madness might betake the mob or even simply delight the barbarians in our midst, we might fondly recall the good librarian of the past for whom the preservation of books was an honor and trust. In our doing this, we pay tribute to the true hearted librarian of memory and myth.

We are hereby resolved to encourage everyone brave enough to establish a library at home consisting of at least 451 volumes of their own choosing—a good functional number as well as a tribute to the far-sighted Mr. Bradbury—only their favorite books, however, or those printed works they personally believe to be the greatest or the most important; those volumes they would want their grandchildren to read or learn to read so as to better know their grandparents by; those titles most in danger of being destroyed, perhaps, or worthy titles already disintegrating from the use of poor quality paper or cheap bindings, or any combination thereof—and to hereafter care for them, replace them as their common sense dictates, or when they find a nicer example, and in good time to find a new home for them among the willing remnants of our civilization; so that they might be passed on through the ages that follow ours, never to be lost.

It is most important that the books to be preserved are of your own choosing, books you have read and selected for your own reasons, or at least you will read one day come hell or high-water. Choosing books only because they are said to be great or important is a waste of the effort, for those are the very ones that will likely be kept by the official librarians of our time—at least for the time being. Abridged texts should be avoided for having already met the grim dictates of some previous authoritarian but more so because the way the author wrote the text is the way it should be. Period. Choose examples on the best paper if you can, with the best binding available and the most readable type (typography being one of the many arts lost to the digital dump) or just an old and well worn copy that fits your hand—but choose.

What is most important for this home library of 451 titles is that particular novel, essay, memoir or history that took your mind and heart at whatever age. A children’s book, perhaps—or twenty. My own collection includes a deal of history, including Following the Prairie Frontier by Seth Humphrey and Warpath and Cattle Trail by Hubert E. Collins. I have biographies including the still in print Happy Days by H. L. Mencken and the sadly forgotten I Wanted to Write by Kenneth Roberts. I include true adventures such as Tschiffely’s Ride by A. F. Tschiffely and The Log of a Forty-Niner by Richard Hale and personal essays such as One Man’s Meat by E. B. White and Sunwise Turn by Madge Jenison. There are great over-arching histories in their original text such as The Decline and Fall of the Roman Empire by Edward Gibbon and The Wealth of Nations by Adam Smith, both first published in 1776, when larger history was in the making, as well as the more specific though always universal Democracy in America by Alexis de Tocqueville. Of course it includes Shakespeare but I am not cheating by getting all of that in one volume (the Oxford edition, of course, since I believe that de Vere wrote most it! ). All the great short stories of Mark Twain are in one volume too! But I have had to avoid the seemingly wonderful Viking Portable editions as a short cut to getting more works into my 451 volumes because of their problematic editing. I do have the definitive Collected Poems of Robert Frost and that for William Butler Yeats, each complete in one volume apiece.

Where I can afford it I have collected original editions of my favorite authors, such as Nevil Shute’s Trustee From the Toolroom and Elmer Kelton’s The Time It Never Rained, but I have happily settled on a well-worn copy of Herman Melville’s Moby Dick that is wonderfully illustrated by Rockwell Kent because an original edition or one in better condition is more precious than rubies. All my favorite novels and stories are there—over two hundred volumes, including science fiction and mysteries. But of course, there is a Sherlock Holmes in three volumes of very readable type. I even have two dictionaries, because those too are being expurgated even as I write this. I have the complete Oxford English Dictionary in the two-volume compact edition from thirty years ago as well as Webster’s Third International. If you love Joyce’s Ulysses, keep that. But, in fact, my greatest worry is for those works that are less well known today, such as Elisabeth Ogilvie’s High Tide at Noon, Ben Ames Williams’ Come Spring, Helen Augur’s Passage to Glory, Robert P. Tristram Coffin’s Yankee Coast, Ernest Rhys’ Everyman Remembers, Stewart Edward White’s trilogy The Long Rifle, Folded Hills, and Ranchero, Stephen W. Meader’s Red Horse Hill, Edmund G. Love’s The Situation in Flushing, and a few hundred more.

451 titles is a relatively small number—about twenty boxes; small enough to move easily when necessary, but too few to be including all the officially sanctioned literature of our age or that of any other. It is time to keep your own library now. Keep the books you love and are happy to live with in your mind as well as on the shelf; those books you like to look up at on your shelves and see there and if the mood strikes—as you know it will—you may read again.

Please note: an independent website is in the process of being created for those interested in the Resolution 451 project, at resolution451.com, as a means of sharing ideas, but it is unnecessary to join anything, anywhere. You don’t even have to have 451 books you love! (Ask someone else you love who can’t keep their own library if they have any favorites to suggest.) That is more a personal matter. I still operate a small used bookstore in Lee, New Hampshire, but I have very few of my own favorite books to sell because I’ve so often recommended them to customers or they are hard to come by at reasonable prices. Given the tens of thousands of wonderful books to be saved from actual or virtual dumpsters, any one bookshop, new or used, will likely have few of the titles you might want in your own library, so it is important to keep handy the internet sources at biblio.com and abebooks.com. The search for just the right edition can be fun! But I do recommend that you avoid the print-on-demand copies that are available for most older titles because they are usually incomplete, cheaply made, faulty, and lack all the verisimilitude of an original, especially in matters of binding and typography. Enjoy the journey.