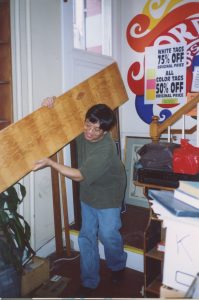 A friend has passed away. Given my own age, this in itself is not surprising, but James Wu was a considerably younger man and remembered that way even more so because we had not seen him in a bunch of years and when last we did, at a gathering of the old crew, his sense of life was younger still, and as full of fun as always.

In 2003, he had been a regular customer of the old Newbury Street shop in Boston, and well noted for a sense of humor that ran from dry ironic to burlesque, so when he simply volunteered to help with our move, I thought he was joking.

Those were dark and shell-shocked days when, after years of facing an imminent end, again and again, as rents skyrocketed around us, and yet always pulling off some last-minute salvation, we were given the final notice to vacate. It was then, shortly before Christmas, that a temporary deliverance came.

We were offered space enough on the second floor of another business just half a block away. After twenty-eight years in the same location, the old building was stuffed, from basement to skylights with shelves and boxes of books—about a 150,000 of those—and maybe a quarter million more of magazines. But to pay for even that stone’s throw move, we had to have the biggest sale of our lives, and a reduction by half. Then we had to move what remained, plus the shelves—with a full-time staff of three, including Tom Owen and Cassandra Silvia and Joe Niedbala as well as a few part-timers. The impossibility of it was obvious to all.

That was when James showed up with his joke—and then again, and again, every day it seemed, soon becoming a part of the AVH crew. There were others who helped for a day or two, here and there—many others who must be thanked, most of them customers, in addition to several previous employees. My kids put aside their regular lives and pitched in with all the youth I lacked. But it was done!

Much of it was packed into used boxes donated to us by two comic book stores, The Million Year Picnic and Comicopia—where James had worked—as well as used wine boxes from our neighbor Bauer Wines—countless hundreds of boxes—maybe thousands, and when those ran out, we packed bundles of magazines and books loose onto the hand trucks wrapped in sheets of plastic to protect them from the January weather.

The banshee sound of packing tape screeched from the emptying rolls for hours. The acrid smell of magic marker filled the air. The dust of two hundred shelving units, most of them more than 8 feet tall, and all the years of detritus behind them, fumed. The shelves were dismantled when possible and carried, James or Joe at one end, someone else at the other, only to be set up again. Thousands of trips were made up that sidewalk—a continuous rag-tag parade up fashionable Newbury Street with our patchwork goods—just a few hundred feet and up a flight of stairs—just. Think Dunkirk without all those messy bullets.

And James was stalwart through all of that, telling jokes and quips and mimicking a dozen favorite actors with elan, and perfect timing for the moment of small disasters. Magazines spill. Books tumble. What had fit there, would not fit here.

And then, only months later, after all the work and angst—and fun—of setting up a new shop, the real disaster struck in the form of a fire in the paint store below us. And there was James again, helping even at the end when all seemed lost. He was not indefatigable. None of us were. But he came back, day after day, and what could be saved was saved.

What you really know of another human being is in what they do. All other judgements are put aside. More than an appreciation for old movies and a good joke, and of course an old book shop, we had too little in common to be constant companions, but we were always constant friends. The thought was always there that he might turn up unexpectedly, and now, . . . suddenly, he is gone.

James Wu was indeed a good man. May he rest in peace.